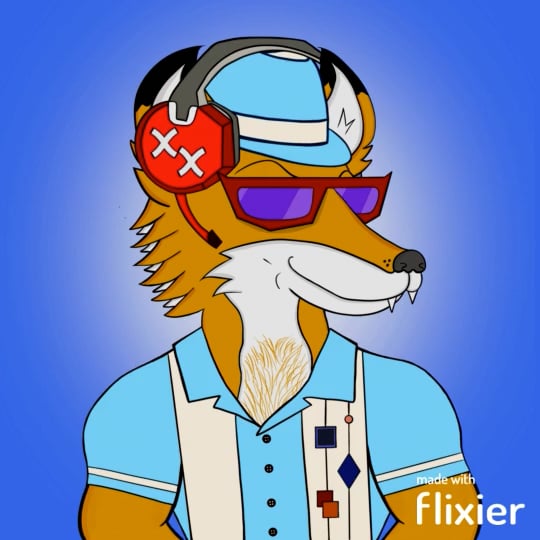 Bango Foxx is a 2-D, anthropomorphic Fox drawn in the animation style of beloved shows such as The Simpsons, Family Guy and Futurama.

Take a look at Bango's life. He shares his views (with his friend Ollie) on what he thinks about the world, crypto, NFTs and everything under the sun.

The Creators of Bango Foxx have gone to great lengths to make sure that every NFT, and every situation included in the collection, be it Bango Foxx at Mardi Gras, Día de los Muertos, snorkeling, bowling, playing baseball or football, dressing up as a pirate for Halloween, DJ’ing at an EDM concert, playing video games in his hoodie or wearing his patented NF Tee shirt - all contribute to the unique narrative of Bango Foxx’s life!

Bango is also very involved in helping protect the environment. This includes bringing awareness to pollutants that plague our oceans and waters. Be on the lookout for the next release of 99 NFTs of Bango's Contaminated Ocean Snorkeling - a very special part of the original collection. Only after the first 6,000 NFT have sold out.

When the first 6000 of the collection is sold out, Bango's friend Ollie Owell will be our next NFT Collection followed by Bango's girlfriend Vivienne Vixxen

Heading into his senior year, Bango Foxx is a cheeky lad ready to take on the world. His self-assuredness and smug attitude is armor for his trepidation as he begins to think about his place in the world, and where he belongs in it.

With his best friend Ollie Owell and girlfriend Vivienne Vixxen, Bango is ready to take on whatever life throws at him.

Bango was conceptualized as the lead in an animated show that allows us the viewer to be a part of that most difficult, joyous, exciting, and at times terrifying part of life; the journey from the safety and security of University and family to becoming one’s own person.

As the BFOC (Big Fox on Campus), Bango is used to everything going his way. However, in his last year as a Senior at Furry University, Bango discovers that this doesn’t always happen, and not every story has a happy ending.

With his friends at his side, and the close-knit community of individuals he belongs to, Bango navigates the next phase of his life, and whatever the universe places in his path.

With two of our founders in Entertainment, one a video game producer for a major gaming company and an artist at heart, the other a writer who has sold shows to networks and studios and a Sunday funnies comic enthusiast, Bango is uniquely positioned to make his narrative and story come to life on screen.

Bango’s comic strip illustrates his personality and character, as well as his thoughts and beliefs. This provides a template for the show we the Founders are writing to pitch to networks and streaming services.

Bango Foxx, along with his friends, are poised to create a long form series with a narrative and character arc that will entertain those familiar with the cryptosphere, as well as those who are not.

Join Bango Foxx in his evolution from concept to - NFT - to an animated character on a show! Should we, the Founders, find success in pitching BANGO FOXX to a long form platform!

Come take this trip with us, and be a part of Bango’s journey.